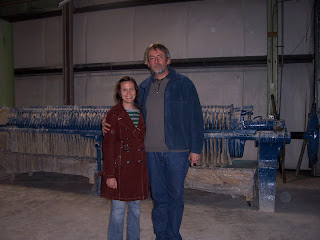 On Monday, my friend Ana and I drove down to Starworks Ceramics for their clay factory open house. Starworks is now processing local clay, it is a mix of clay from Candor and Cameron, North Carolina. Takuro Shibata, director of Starworks Ceramics, gave us a tour of the clay factory and discussed how the clay was processed. Takuro wanted to demonstrate the process, but decided it would be too dangerous with a large group of people.
Ten pound clay samples were given out to those attending the open house. Since it was a long drive for me and I was quite confident I would like the clay, I bought 50 pounds. Good idea. I love this clay. I gave it a whirl yesterday and could not stop making pots. It was soft, yet would stand up. I made a few rounded jars and was very pleased with how the clay responded to my shaping. I immediately wanted to go buy more, but thought it best to use up the commercial clay that I have onhand first. Boo.
Much to my surprise, Starworks had a special guest, Phil Rogers. I was quite excited because I had just discussed with Ana on the drive down that I regretted not talking to him at the conference. I was a bit starstruck and my natural response in this type of situation was to be very very quiet. I was thrilled to have a second chance, so I took action this time. I told Ana, "I'm going to ask for a photo with him, come back me up." She did and now I have this lovely photo in front of the clay filter press. We talked for a bit about wood kilns and chicken grit. It was awesome.
Posted by Julie Jones at 7:39 PM