I am just now recovering from the NC Potters Conference that was held this past weekend in Asheboro. It was my first time attending the conference and I had an amazing time. It is hard to convey how much I got out of it.
This year's conference featured potters Phil Rogers, Alleghany Meadows and Mark Pharis. I enjoyed all three, but feel like Phil's pots were more influential because their traditional shapes and glazes are closer to what I aspire to make. One key point from his demo was to keep some life in the pot. A lot of Phil's decoration developed from the way glaze reacts to the surface of the pot. He trimmed the pot with a loop tool immediately after throwing it (upright, before cutting the pot off the wheel head). The only work that had to be done after the pot was leather hard was to hollow out the foot, the profile of the pot was already complete. 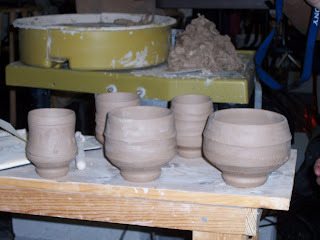 I bought an ash glazed wood fired yunomi. I felt this piece best represented what I wanted to take away from the conference. It has subtle undulating lines that catch the ash glaze to make the focal point of the pot. 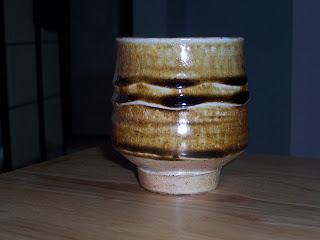 The presentations at the conference were very enlightening. Alleghany Meadows presented "French Fries to Cone 12 in 4 hours. A survey of sustainable and alternative fuels and practices for the studio." I came away with a basic understanding of how a kiln fueled by recycled vegetable oil would work. Also Nancy Utterback's " Green ceramics: The seduction of sustainability" was very informative. She compared the carbon footprints of different firing techniques. Turns out wood firing is not as bad as one might think because wood is a renewable source. Overall wood firing has zero net emissions.
Posted by Julie Jones at 10:21 PM