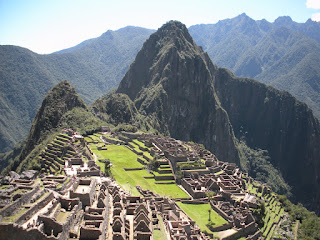 Since I can not articulate the beauty of Machu Picchu myself, I'd like to quote Hiram Bingham.
"In the variety of its charms and the power of its spell, I know of no place in the world which can compare with it. Not only has it great snow peaks looming above the clouds more than two miles overhead, gigantic precipices of many-colored granite rising sheer for thousands of feet above the foaming, glistening, roaring rapids; it has also, in striking contrast, orchids and tree ferns, the delectable beauty of luxurious vegetation, and the mysterious witchery of the jungle." No doubt, this was one of my favorite trips of all time. The first photo is Machu Picchu from inside the ruins. The next one is the agricultural terraces (look how small the people are). 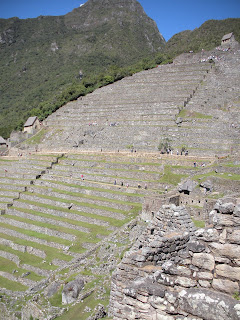 The adventure portion of our trip was a hike to the top of Wayna Picchu, the mountain that is generally the backdrop of most pictures and paintings of Machu Picchu (just like my photo). At first glance it appears difficult to climb but although the ascent is steep its not technically difficult. The path has no handrails and its edges fall abruptly to a deep gorge. With that being said, as we climbed I couldn't help but wonder how many had fallen off this mountain. You had to be in good physical shape and take great care with each step, one missed step and off you go. There were steel cables in some areas to provide support. Many times I climbed with hands as well as feet, there was security in being close to the ground. Also I was fine as long as I had one side of the mountain to cling to for safety. Once at the top I found it difficult to stand upright. I felt the wind could blow me off (see photo with bad posture). In addition I was also dizzy...altitude or fear or maybe both. Steven did not make it out on top. He had a quick look and said no thanks. The other photo is of Machu Picchu from Wayna Picchu (look how tiny MP looks). 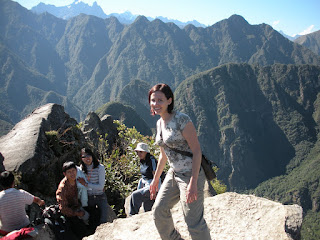 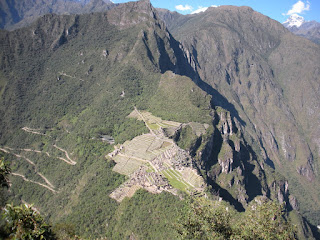 Once we returned home I searched the Internet for deaths/accidents at Machu Picchu. No searches came up with any statistics. The fact that the Peruvian government is not liable for these deaths could be a reason for not keeping up with such facts (or at least publishing them). The only thing I came across was " There have been some accidents and in every case the most difficult thing was finding the corpses afterward. " Yep, I climbed that mountain.

The pottery portion of the trip included a visit to Lima's Rafael Larco Herrera Museum. The private museum is said to house over 45,000 pots, many of which were collected in the 1920's by a former vice president of Peru. This photo is of the storeroom in which most pots were housed, they were stacked in many cases all the way to the ceiling. The museum displayed the best pieces, but photography was not allowed inside the main museum. The type of vessel that was most memorable to me was the stirrup-spout vessels. The spout, looked like a saddle stirrup and appeared to be how the vessel was carried. There was a graphic inside that showed how the spouts were made (hand-built), if anyone needs a demo, I can give it a try. 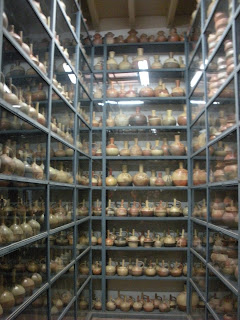