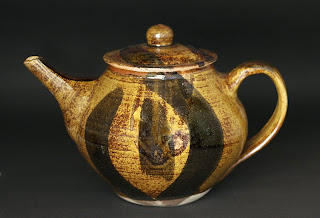 Joe and Christy let me put a lot of pots in their last firing. They were planning on only firing 2 of the 3 chambers of their kiln when I had a "great idea". I had enough pots made to fill a chamber. They had the space, I needed to fire, and I wanted to see their new pottery. Perfect.

Most of the pots I wanted to fire were part of a commissioned 10 piece place setting order that included dinner plates, salad plates, tumblers, bowls, a large platter, a large bowl, a pitcher and a gravy boat. I also had a few teapots, tea cups, tea bowls and mugs. It was approximately 65 pieces all together. It was definitely a chamber's worth with all the plates, they tend to eat kiln space (these were glazed inside and out as well, not stacked). My pieces were spread throughout the 3 chambers, I did not have them all together in a particular chamber.

Every now and then the kiln gods cut me a break. In all fairness I think it was past due. I haven't shared those bad firings on my blog yet, maybe some other time. I'm enjoying this one too much to reflect on that right now. Let's just say I got results that I had hoped for or at least not too far from it. There was a nice reduction of the clay, especially in the first chamber. My temmoku glaze was the best I've ever seen it. The shino glaze that I used came out almost a tomato red. I was not expecting that but it looked really good when paired with the temmoku. It was a bittersweet firing because Joe and Christy had bloating issues with their clay. Hopefully by their next firing they will have that problem worked out. The two clays that I used had no bloating issues, Highwater's Zella Stone for the plates and the Starworks' white NC clay blend for everything else. 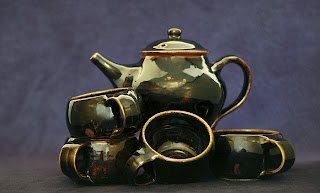 My favorite pot was my amber celadon teapot that had some black slip designs (top photo). I've used this glaze in kilns that had either salt or soda introduced into the kiln. I have learned to protect it so that the color does not get washed out. But it looked so much better without any salt/soda. I was also pleasantly surprised that a teapot finally worked out for me. Two months ago I would not have bet money on that one (see earlier posts: lids, disaster, etc). I guess the gods are stringing me along for a little while longer.

These photos were taken by my friend Jonathan Truesdale. 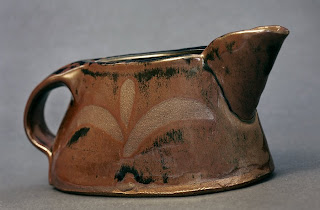 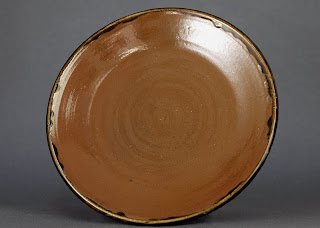 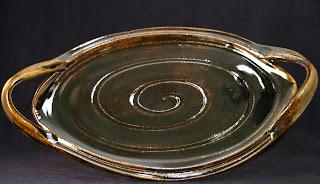