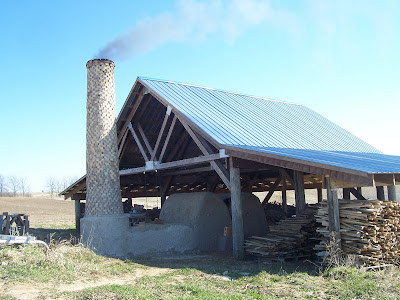 Loading the kiln took 3 full days, even with not wadding the pots in the 2nd and 3rd chambers. We used sand instead of wadding since salt would not be introduced into the kiln and there would not be much ash in these chambers. This worked well except for some of Joe's ash glazes in hotter spots. We had some pots stuck to shelves but for the most part no problems.

My only minor complaint during loading was the cold. I'm originally from Mississippi and that should give you an idea of my cold tolerance, I don't have any. It snows about an inch every 4 years down there. It's just not that cold. But fortunately Christy taught me how to dress warmly, a lesson that had not been necessary before. All I can say is coveralls are the bomb. Yes, I look like a tick on a blood clot, but I'm warm. Another obstacle that I was not used to was sleet and snow while carrying pots from the studio to the kiln. It is not easy carrying boards of green glazed pots 50 yards while pelted in the face with sleet at 30mph. Needless to say I left Wisconsin with a rosy cheeked naturally blushed face. Windy Ridge is definitely the most appropriate name for this pottery.

On Easter Sunday we had a short break from loading that included a hearty meal prepared by Christy's mom and dad complete with caramel brownies and peach pie. Mmm. 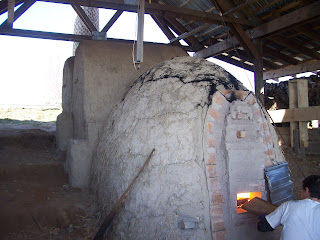 Now for the firing. We started the kiln Monday night after loading. Joe candled the kiln starting at 11 pm. He left around 2 am and let the fire burn down. I think he got up to around 200 degrees. I showed up at 6 am and the temperature was around 125 degrees. We gradually increase the temperature about 50 degrees per hour for the first day. Christy ended up with the night shift on Tuesday night. I left around 11 pm and returned at 7am on Wednesday. It was a pretty easy stoking cycle going so slow, except for Christy's shift. I forgot what temperature she was at (maybe around 1100), but she was at the point where the firebox would get overstuffed when stoked from the bottom but it was too early to start stoking on the grates. She kept it going, but it was a lot of work. I think next time they have decided to stoke on the grates earlier. Reduction started around daybreak on Wednesday. From 1 to 6 pm we held the kiln near top temperature, trying to build up ash in the first chamber. Around 6 pm we got the first chamber to 2350ish and started stoking the second chamber. We stoked the second chamber for 3 hours with most cone 10's moving or at a half. We started stoking the last chamber when cone 08 was down, finishing that chamber in a mere hour and 15 minutes. I'm sure I'm slightly off on the exact times, I don't have the firing log for reference. There is also the cooked brain effect that happens after a while, when memory loss is at an optimum. J and C please correct me if I am wrong at any stage.

We let the kiln cool for a day and a half, opening it on Friday at noon. Unloading took no time, only a few hours. These photos were taken as we were unloading. The first photo shows the back stack in the first chamber. You can see a lot of my plates in the middle of this stack. The next photo is the pots just out of the kiln. Most of my pots are in the front left of this photo. The last photo is a picture of some early shoppers. These ladies were eager to check things out. 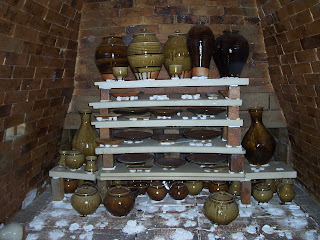 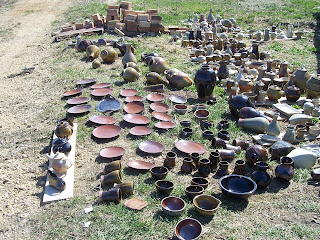 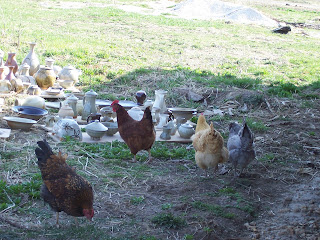